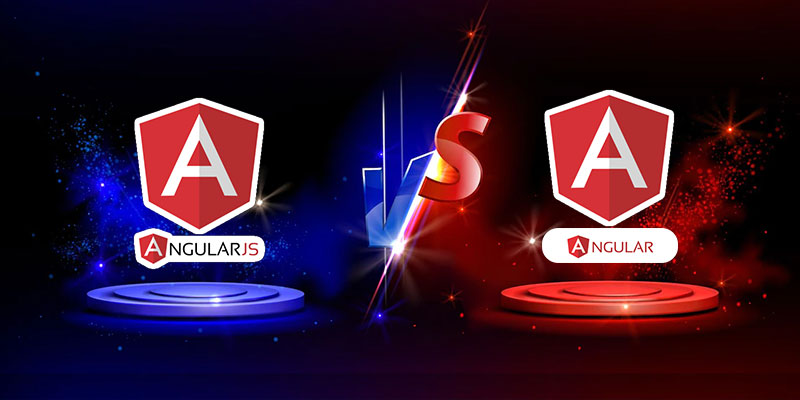 Angular vs AngularJS : Facts And Differences

Everybody wants to build an app that does not clutch your budget and offer smoother operations. With the help of AngularJS and Angular, you would be able to build such applications meant for your audience. What you need to know is that Angular is the advanced version of AngularJS. What’s the difference between Angular vs AngularJS?

For front-end developers, Angular has been and probably still is the most preferred choice of framework for building web and mobile applications. But technology has evolved radically over the years and the same is the case with front-end technologies. The three main front-end coding languages that work in conjunction to make up the Internet are HTML, CSS and JavaScript. AngularJS is a relatively new JavaScript framework backed by Google and a large community of developers and programmers.

AngularJS is a trending framework nowadays as it has wide scope for structuring exceptional single-page web apps. It is a structural platform that fundamentally expands the HTML DOM with added features and helps in forming a responsive application to the users’ acts.

Whereas, Angular versions are highly preferable as a robust front end-tool supplying components that assist a developer to write, re-write, easy-to-use, readable, and maintainable code. Let us have a quick look at Angular vs AngularJS and their concepts.

Angular is a framework that is used for developing single-page applications using TypeScript and HTML programming languages. Angular is generally denoted as Angular 2+ or Angular v2 and beyond.

Angular2 follows core and optional functionality as a set of TypeScript libraries and utilizes numerous features of ECMAScript 6 that you may import to your applications. Its architecture depends on certain crucial scope and conceptions.

The basic building blocks in Angular 2 are NgModules, which provide a compilation structure for components and directives. These modules of Angular 2 assemble interrelated codes into a well-designed set.

In this approach, the application comprises a root module that authorizes bootstrapping and characteristically has more feature modules and improvements.

Before understanding Angular vs Angular JS, let us have a look at what Angular versions are.

Angular 1 is at the centre of the DOM compiler. We can write HTML, and the Angular compiler takes charge of assembling it into an application. Angular 2 is based on JavaScript. It is open-source to develop web applications from scratch in JavaScript and HTML.

Angular 4 is a JS framework for developing apps in HTML, JavaScript, and TypeScript, which is a superset of JS.

From the varied versions of Angular, the release of Angular 6 had the prime focus on the toolchain, making it function promptly with Angular in the ng-app update, ng add, Angular Material + CDK Components, Angular CLI (command-line interface) workspaces, animation and validations package, RxJS v6, and Angular Elements.

The version of Angular 9 is rationalized to work chiefly with TypeScript 3.6 and 3.7. It has the ability to move all the applications to employ the Ivy compiler view engine and runtime by default.

AngularJS is an open-source JavaScript framework that is maintained by Google and a community of Angular developers to address challenges faced in forming single page web applications. In 2009, AngularJS was initially developed by Misko Heavery and had a motive to ease the development and thereby, the testing process of these applications. AngularJS programming renders the highest simplifications and improvements to the complete development approach and constitution of JS coding.

AngularJS renders the program for model view controller (MVC) and model view-view model (MVVM) architecture, besides the components that are usually used in dynamic web technologies. The latest version of AngularJS is 1.8.x. The framework is in long term support mode since July 2018.

It has gained immense popularity as is the front end portion of the MEAN stack, comprising Express.js app server structural programs that link dynamic MongoDB databases, Node.js server runtime environment, and Angular.js itself.

Vital Difference Between Angular Vs AngularJS

AngularJS uses the functions by reading the HTML page, which has added norm HTML attributes rooted into it for building user interfaces.

The following table depicts the aspects of Angular vs AngularJS in detail:

Which One to Choose: Angular VS AngularJS?

Angular and AngularJS both come with various benefits. Google maintains both frameworks perfectly, so it holds extensive community support. Most people prefer Angular as it develops dynamic apps for both mobile and web and builds single-page apps using HTML and TypeScript.

From the article and above comparison table depicting the difference between Angular Vs AngularJS, we can observe that Angular.JS is a robust framework that is used to develop scalable client-side website applications with lesser development effort and time.

With its valuable concepts and functionalities, it gets the application to run fast and be stable. In fact, the Angular version provides several benefits to front end developers, which is the prime reason why various popular companies use Angular for their projects.

Oditek Solutions provide Angular development services for building dynamic desktop, mobile, and web applications. Contact us today with your web idea. Please reach out to us for the development of enterprise-grade application needs that require an excellent front-end user experience.

We make use of AngularJS, an open-source client side web application framework for creating single page application which only requires HTML, CSS and JavaScript on the client side. With this technology, we can extend HTML vocabulary and create powerful well-structured, rich applications in a modular...