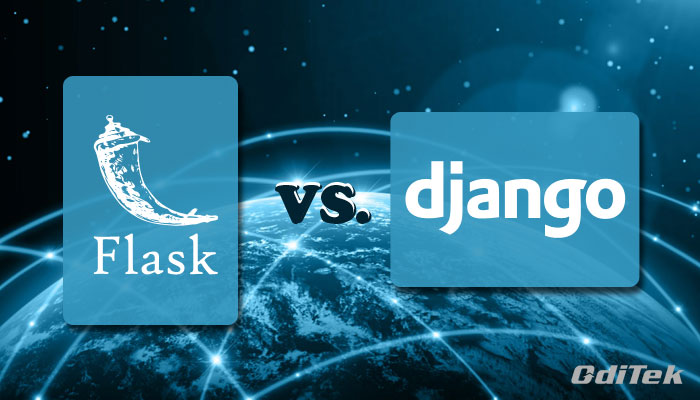 Python, a programming language which is rapidly gaining preferability & popularity among start-ups and cloud technology provider companies all over the world as it is favored for its clear, readable code, and flexibility. Python is the language of choice be it Mobile Application, Web Application, IoT, machine learning or AI. It has a wide range of web frameworks that can make your project into reality from your ideas in the fastest time possible because of which it is being in high demand. Flask and Django are the two most widely used programming languages.

A web developer has an alternative option to look over an extensive range of web frameworks while utilizing Python as server-side programming languages. One can take leverage of the full-stack Python web frameworks to accelerate the development of large and complicated web apps by utilizing a number of robust features and tools. Likewise, one can also opt for micro and lightweight Python web frameworks to assemble basic web applications without putting additional time and effort.

Both Django and Flask are intensely well known among Python software programmers. Django is a full-stack web-based framework for Python in comparison to the flask which is a lightweight and extensible Python web framework. Django buildup methodology is based on the batteries-included approach. It empowers programmers to achieve common web development assignments without utilizing third-party tools and libraries. Some of the robust features provided by Python are not included in Django.

It is developed on the basis of two robust POCO projects – Web Server Gateway Interface (WSGI) toolkit and Jinja2 template engine from which developers can take advantage of WSGI to communicate web application and a web server through a universal interface. Likewise, the Jinja2 template engine makes it simpler for programmers to build dynamic web apps. Thus, it becomes essential for web developers to grasp the major differences between Flask and Django.

Flask was initially launched as an open-source web development framework in the year of 2010. It is broadly used as a web framework for Python. It has a similar concept as a LEGO set where developers can build anything they want which makes Flask easy to use and understand.Lets have a look at its features, 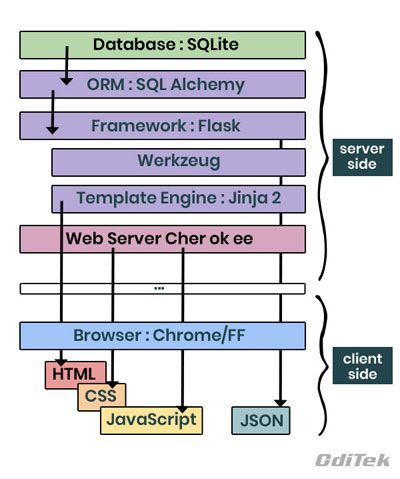 1. Speed
Although speed wasn’t considered as the main attribute during the development phase of Flask, to a user speed is of utmost importance. Flask has a faster performance ratio as compared to Django as it has a minimalist design approach and can support hundreds of queries per second without any negative impact.

2. Simplicity
Flask provides developers with necessary features to build a prototype for a web application easily as it is being minimalist. It allows developers to have control as well as flexibility as to how they wish to develop their web applications. There are various templating languages available in Flask along with the default language Jinja2 library. Flask has an inbuilt WSGI toolkit library and web server so that you don’t have to depend on external web servers like Apache to test your applications.

3. Easy Database Integration
Flask doesn’t have an additional database access layer nor does it rely on ORM (Object-Relational Mapping) in comparison to other web frameworks. As a result, integration with database toolkits like SQLAlchemy and NoSQL databases like MongoDB and DynamoDB makes it easy.

Django was released in the year of 2005 and is aimed as large applications. It consist an ORM, which permits you to switch between various relational databases easily and it even provides an MVC and Django REST framework. Let us review its features in details, 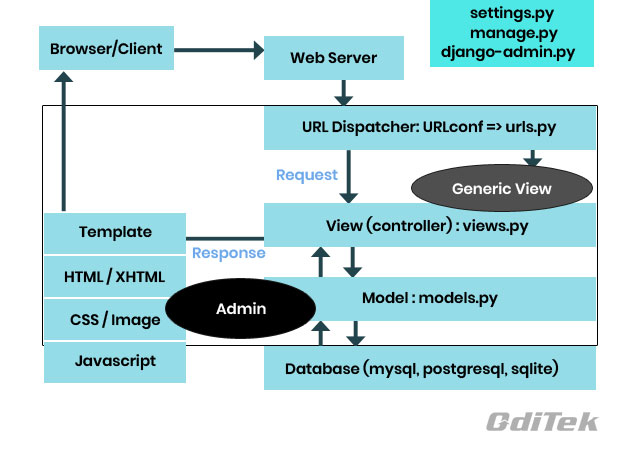 1.Browsable API
Django REST framework supports REST-ful API and an inbuilt user model API which allows for authorization and authentication. Because of which it supports human-friendly HTML output generation for a resource when the HTML format is requested. These pages allow you efficiently to browse for resources and developers which can execute GET and POST easily in their respective browsers. With Bootstrap, this browsable API is built which make its customization simple.

2.Simple Database Management
As Django includes an ORM, it permits various relational databases like PostgreSQL, Oracle, MySQL, SQLite etc to connect with application data. Django automatically allows models and easy creation of tables and fields. It also makes changes like creating tables and indexes which are rolled out with a single command.

3.Useful Admin Panel
Django includes an automatic and very customizable admin panel in which it makes the production and development of a CMS (Content Management System) very easy.

So overall Django and Flask are two diverse frameworks, each having its own set of pros and cons. The choice of the framework depends on the developer what they deal with. While Django is more suitable for heavy and complex applications in comparison to Flask which is suitable for lightweight simple web apps. If you are a learner, then Flask is the recommended framework as it is a great learning tool as comes with several modules and libraries. Django and Flask both can be used to deliver a final & professional product but Django may have a slightly advanced learning curve for a beginner.

For more information about Python Frameworks for web development, please drop an email to info@oditeksolutions.com

Python is a dynamic object-oriented programming language that offers strong support for integration with other languages and tools.This high-level language can be used for development of different software types. Serving as a basis for many open-source and commercial frames due to the OSI-approved open source...