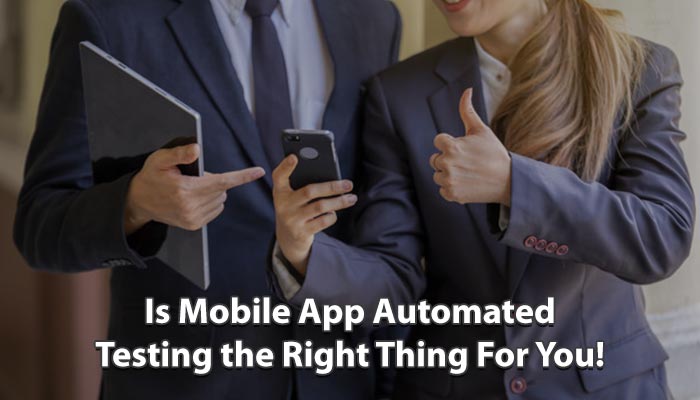 Is Mobile App Automated Testing the Right Thing For You?

Automation Testing for Mobile has its own set of challenges in the world of mobile applications. It becomes a monotonic task for the manual testing teams to spend hours for testing different applications for different devices having separate operating systems as well as different versions. It is also not possible to create an army of manual test engineers for all separate devices and OS.

1. Testing slows down the app release cycle – It is because you want to release the features faster to decrease the manual effort required to run the most important regression tests and also to allow the testers to focus on testing new features.

2. Resolve the errors reported after the release - Automation will help you deliver continuous efforts so that each commit can be deployed routinely. If the feedbacks will be triggered faster then, the expenses will be less to fix any issue that is found.

3. Challenging Quality Assurance - When the aim is set to improve the testing speed and coverage, the QA team will find it to be more innovative.

How to choose the apps to be automated?

1. Are critical in terms of the apps’ functionality
2. Requires a huge amount of data for testing
3. Can be simplified and structured into logical steps and expected outcomes
4. Have already caused issues in the past
5. Are the most time-consuming and overtiring for manual testers

There are large numbers of Automation Tools for Mobile Application Testing available in the market. Select a reliable tool that will best suit your application, providing supports to the platform and technology, assimilates best with your prevailing process as well as match the skills of your QA team.

To know more about these tools do visit our blog page- https://www.oditeksolutions.com/Best-Mobile-App-Automation-testing/

It is quite a tough task to decide whether to go for a manual test or to choose an automated one. You can ease it down by considering the types of tests that will be run, then discussing it with the testing and development teams, and lastly identify what key areas would be benefited from automation.

The areas where manual testing can be proven as the best option includes exploratory, user experience, and accessibility testing. Reliability should be given more importance than automating. You don’t need to automate all the available tests, the ones that need to be performed only a few times can be left for manual testing. Collectively we can say the tests that are more repetitive and require a large amount of data are best to be automated.

The test types that best suit to automated testing are-

1. Data-driven testing: The applications that will require multiple sets of data for testing or have complex calculative areas that can result in human error.

2. Regression Testing: This is used to test old and new functionalities after every release from one test cycle to the next.

3. Smoke Testing: A core set of smoke tests can be developed once the unit tests pass consistently. They will help to quickly determine if the build will require further testing or not.

4. Performance Testing: When there is not a manual testing option and tools are needed.

5. Cross-device testing: Manual testing takes a lot of time and effort for continuous testing on multiple devices. Automation Testing for Mobile and will save time and ensure that applications are functional and accessible across a large range of devices and OS versions.

The final results are reported along with the total outcomes after completion of the tests. A tool that can log videos and screenshots of every test and inform you directly about the bugs will be required so that the issues can be immediately shared with developers. You can also measure and monitor your quality metrics in the final test report that will be helpful for the QA teams. The following are some examples of such tools

1. Bugs reported in production - Here the goal should be to track the before and after progress result of releasing the test code. This will help to measure how many defects are found during pre-production testing versus during current production testing. It will help you save from bad reviews.

2. App crashes – No user wants to use an application that crashes often. They might get frustrated and uninstall it. This issue can cause a huge loss of interest of customers in the brand. Hence, it’s very important to carefully track and address every crash when noticed.

3. Bad user reviews – This is very obvious in the app store for almost every application. But this is something that your team wants to end up with. Sometimes Critiques can be helpful but it should not be about bugs that could have been fixed before production. The apps that are updated more frequently tend to be loved by customers and hence rated higher.

Mobile Automation testing for mobile is a round-the-clock journey. The aim is to improve the present test suite and to minimize the number of test cases that are being run manually, instead of eradicating manual testing. It gives you access to conduct a thorough check. Mobile App Automated test tools when used for the long run purpose will be very beneficial to the firm by reducing the time as well as money.

At OdiTek Solutions, we have a dedicated Automation Testing team that will help you identify the best tool for your organization to be helpful in the long run. Our technical support team will be available 24*7 to make sure your concerns and queries get addressed as well as resolved as soon as possible.