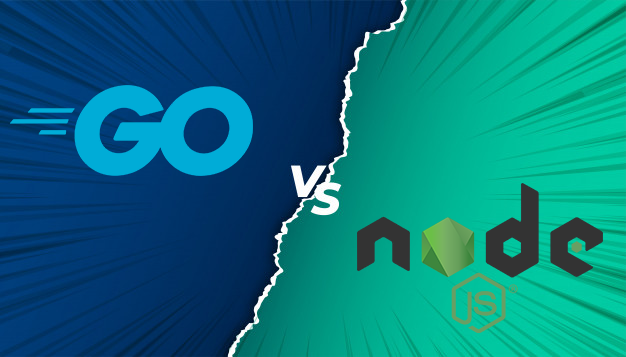 The backend of any application is probably the most important part of a product since it is responsible for all kinds of sensitive business operations. You can describe the quality of an application by its performance, scalability as well as maintainability of the complete system security. The above things directly depend on the backend of an app. Golang vs Node.JS is still a debatable topic among developers while choosing the right programming interface for your app backend although there are plenty of tech stack options available such as Ruby, PHP, Python, etc.

Now-a-days Node.JS and GO both are considered the most promising technologies for backend development. Node.JS is a Javascript language whereas Go is developed by Google. Let’s know more about NodeJS vs Go performances.

Node.JS is an open-source cross-platform tool that runs on JavaScript code which has been the most popular programming language. This enables its developers to write code from both client-side as well as server-side simultaneously with a common language. Node JS is now being adopted widely for full-stack web development by popular MNC’s like Netflix, eBay, etc.

Node JS is effective in various ways and is supported by several operating systems like Windows, Mac, Linux, etc. Most of the companies use it for backend and full-stack development purposes instead of desktop apps and frontend development. For convenient web application development Node.JS can also be integrated with third-party libraries.

Go Language is an open-source, multi-purpose, and statically-typed programming language. It is a product of Google which was created in order to provide advantages of popular languages at one place for achieving better performance. It is otherwise called as Golang and is basically built on the best characteristics of other languages such as C or C++for performance/safety and Python for speed.

It has several useful features such as structural typing, memory safety, limited garbage collection, etc. that make the process of coding is much easier. It is now getting popular for concurrent programming since it comes in handy with dynamic interfaces as well as advanced memory safety. Google Go supports operating systems like Microsoft, Linux, Dragonfly, MacOs, etc. It has been proven as an ideal fit for networking apps, cloud interfaces, and microservices.

Even though both languages are widely used since 2009, both are equally mature having a great support community. However, Node.js has greater popularity.

The primary objective of Go developers was to achieve higher performance as compared to Node JS and eventually they succeeded with that. JavaScript works slower than other programming languages hence Node.js isn’t capable of providing high-speed results. Whereas Golang is based on C and C++ is lightweight hence provides a fast solution.
Depending upon the web application you’re developing the performance of Node.JS can be either low or high. However, if we consider the network communication or database interaction, the performance of Node.JS, as well as Golang, is almost similar.

The “Goroutine” feature provided by Golang facilitates numerous tasks to be performed simultaneously in a parallel manner whereas the event-callback mechanism of Node.JS enables developers to work with a single task at a time that to in a sequence manner. When it comes to building large applications requiring massive scaling and a lot of parallel processes to be executed at a time then Node.JS is not effective.

The “Goroutine” feature allows it to be more functional ensuring productivity whereas Node.js doesn’t come with such functional scalability. There are several claims by certain companies that Node.JS has some issues in its environment for massive scaling and on the other hand, Golang is designed for hassle-free scalability.

Node.js follows the traditional way of error handling and fixing i.e. throw/catch mechanism. That means errors upon visible requires immediate fixing in order to move ahead to the next stage. Golang facilitates its users with several ways of error handling. It requires explicit error checking methodology that means while the program is running in a certain way the error codes returns afterward. Although this process seems complicated, it ensures better reliability and consistency.

A large variety of necessary tools, frameworks, and libraries are present in Node.JS for development whereas in case of golang the number of packages and tools are small as compared to Node.JS.

Node.JS works on JavaScript framework and JavaScript being one of the most popular languages, very is easy to learn since there are numerous courses available on the internet out of which most of the courses are supported by the JavaScript community. Hence becoming a Node.JS developer is not that difficult.
On the other hand, it is very important for Golanguage developers to learn its concepts, processes, interfaces, pointers, etc. Hence before hiring golang developers you need to be familiar with this language and since golang works for backend development, you’ll additionally need frontend developers too.

There is nothing such framework called “perfect” that can meet up all the requirements of the product or project. Both NodeJS and Go are wonderful programming frameworks and offer a wide range of development options that can be used to build outstanding products We, at OdiTek, with a team of experienced developers, have been delivering extra ordinary services in Node.JS and Golang frameworks for the past few years. Rely on our expertise for your next off-shore project.