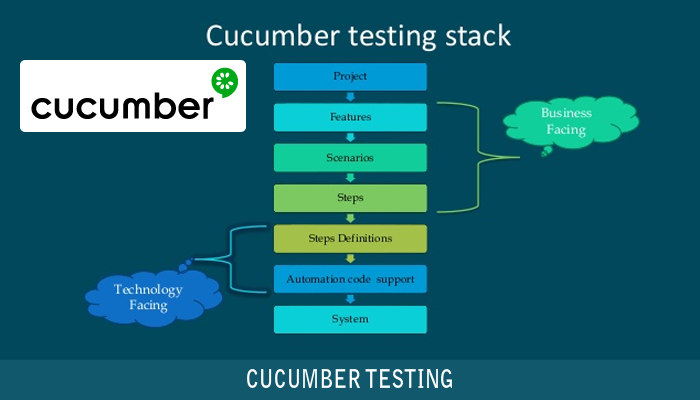 TestNG is a testing framework inspired from JUnit and NUnit, but introducing some new functionalities that make it more powerful and easier to use. TestNG is an open source automated testing framework; where NG means Next Generation.

Cucumber is a tool based on Behavior Driven Development (BDD) framework which is used to write acceptance tests for a web application. It allows automation of functional validation in easily readable and understandable format (like plain English) to Business Analysts, Developers, Testers, etc.

Listeners and Reporters Concurrency An example of running same test method simultaneously (20 times, by 3 threads):@Test(threadPoolSize = 3, invocationCount = 20)public void concurrencyTest() {System.out.print(" " + Thread.currentThread().getId());}Result:13 12 13 11 12 13 11 12 13 12 11 13 12 11 11 13 12 11 12 13  Group of Tests Parametrized Tests Parametrized tests are very simple with TestNG (no constructor awkwardness).You can have as many data providers in one class as you wish. You can reuse them (call them from other classes), and you can make them "lazy", so each set of parameters is created when required.Once you migrate to TestNG you will notice that you start writing a lot of parametrized tests. Because they are so very useful! Test Fixture Settings Dependencies between Tests Exception Handling Documentation Integration with other toolsWith TestNG you still can:

given (some context)when (something happens)then (some behavioral validation)  Report Integration with other tools Features For Ex: Feature files related to smoke test need not run all the time. So if you mention a tag as smokeTest in each feature file which is related to smoke test and runs cucumber test with @SmokeTest tagExample of use of single tags: @SmokeTestExample of use of multiple tags: @SmokeTest@LoginTest

Cucumber vs TestNG: Which is better?