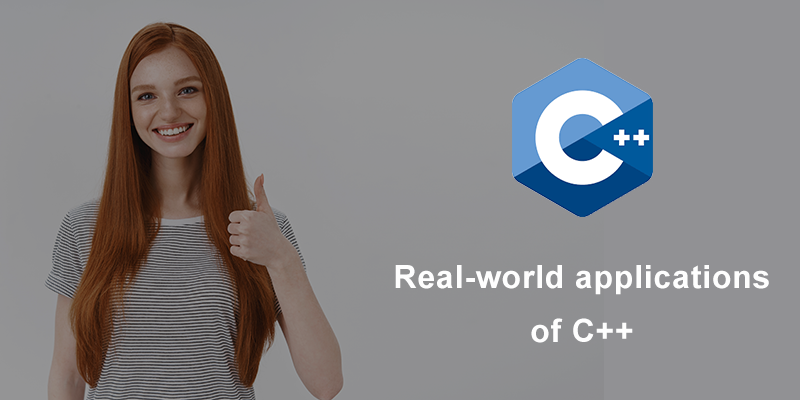 C++ is a popular programming language for creating a wide range of technical and commercial software. It is a general-purpose programming language that evolved from C language to include an object-oriented paradigm. It’s a compiled and imperative language. Because C++ is a middle-level language, CPP applications can be at both low-level (drivers, kernels) and higher-level programs (games, GUI, desktop apps, etc.).The two primary reasons for which C++ is the preferred choice in most applications is because of its speed, C++ is quicker programming than most others, and it has strong concurrency support.

This makes it beneficial in situations when performance is crucial and latency is necessary to be kept to a minimum. Such demands are common in high-load servers and the second reason is that C++ is more closely related to hardware than other programming languages, such as Python. This is beneficial in situations where software is tightly connected with hardware and low-level software support is required. C++-based software is well-known for its speed and efficiency. As it continues to grow and evolve, C++ has been used to build numerous libraries, applications such as Microsoft Office, game engines such as Unreal Engine, and even operating systems such as Windows over a wide range of platforms.

There are various CPP applications and listed below are the few areas where c++ is popularly used.

C++ is used to program the rendering engines of several web browsers simply because of the speed it provides. To ensure that users do not have to wait for content to appear on the screen, rendering engines must execute faster. As a result, the programming language for such low-latency systems in C++.

All graphics applications necessitate quick rendering, and C++, like web browsers, aids in the reduction of latency. C++ is the backend programming language for software that uses computer vision, digital image processing, and high-end graphical processing. C++ is used as the primary programming language in even the most popular games with a lot of graphics. The speed that C++ provides in these instances allows developers to reach a wider audience because an optimized program can run on low-end devices with limited compute capacity.

C++ and C, the predecessor of C++, are used to write Postgres and MySQL, two of the most extensively used databases. These databases are used in practically every well-known program that we all use on a daily basis- Quora, YouTube, and so on.

It is employed in the creation of new C++ programs. The applications with a graphical user interface, such as Adobe Photoshop and others are widely utilized. Many Adobe systems applications, such as Illustrator, Adobe Premiere, and Image Ready, are written in C++, and Adobe developers are considered active members of the C++ community.

The majority of compilers are developed in the C++ programming language. Compilers for other languages, such as C#, Java, and others, are mostly written in C++. C++ is also employed in the development of these languages because it is platform-independent and capable of producing a wide range of software.

It is a set of software development tools that may be installed as a single package. They aid application development by providing a compiler, debugger, and maybe a software framework.

These are used to access specialized hardware features without having to create hardware-specific code.

It is a software intermediary that enables two apps to communicate with each other.

For C++, there are a variety of documentation tools. Some are similar to built-in Javadoc tools in Java, such as Cpp Doc and Doxygen.

C++ is a universal programming dialect that’s for the most part utilized in systems programming and embedded systems. The process of creating operating systems and drivers that interact with hardware is called System Programming. A few examples of embedded systems are automobiles, robotics, and appliances. Because of its security and features, C++ is referred to as the safest language. Developers who want to work with programming languages should learn C++ first. It’s simple to learn because it is a concept-based language. Its syntax is fairly simple, making it simple to write or develop, and errors are easily corrected. At Oditek Solutions, we have a large team that is well-versed in C++ and can develop C++ applications both on Linux and Windows platforms.