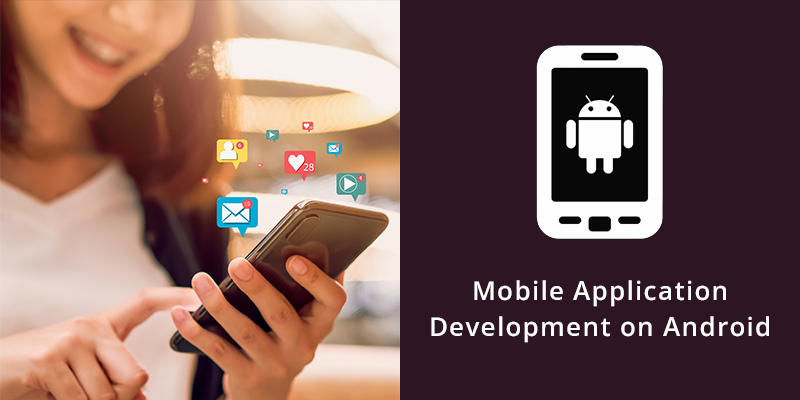 Building an Android app, whether native or cross-platform brings you a world of possibilities. Android has progressed significantly over the years, with more than a decade of continuous upgrades and enhancements. These improvements include everything from efficiency and optimization to security fixes, new UI elements, improved touch-screen gestures, split-screen compatibility, and more.Since being bought by Google and released to the public in 2008, Android has grown to become the most popular mobile operating system, with a market share of 71.93 percent as of January 2021.

As a result, today's Android mobile app developers have a thorough understanding of the platform, including how it works, what it can do, and what it will be able to do in the future. Android developers will continue to create more engaging and memorable digital experiences to users for many years to come, armed with this essential knowledge and expertise.

Putting your application on the Google Play store – either separately or in collaboration with the Apple iOS store – has a lot of advantages for your business. Let's understand how!

In its most basic form, the Android platform is built on the Linux operating system, and so replicates a multi-layered desktop operating system in layout and functionality. You may use a variety of components in the user interface here, such as boxes, lists, windows, widgets, and more, to create a rich, engaging experience that your users will enjoy.

The development of Android apps is reasonably rapid, simple, and inexpensive. To be sure, you'll need a clear vision, a defined target audience, reasonable expectations for what the app should do, and the ideal Android mobile app development company on your side.

You'll be shocked at how efficient the Android development cycle can be when the appropriate elements are combined. As a consequence, you'll have a more relaxed and straightforward development process, allowing you to go to market faster and surpass your competitors.

Android is regularly updated as an open-source framework with new features, tools, modules, and components. This dramatically expands the design options available to programmers. It also enables businesses to unleash their creativity when it comes to creating an immersive user experience that their consumers will like. More significantly, the more unique your application is, the more chance it has of standing out from the crowd.

Even for them who aren't highly tech savvy, your Android mobile application should be simple to use. This is where Android shines, since you can fine-tune each and every function of your app for simplicity of use. From menus and tables to sliders, lists, and dropdown boxes, we've got you covered. Each of these components may be customized to make them more user-friendly and interactive.

Android is one of the most accessible and diverse platforms on the market, With over a decade of support from a committed user community, frequent upgrades, and a well-deserved reputation as a highly stable foundation. Furthermore, as developers grow more experienced with the framework, they will be able to turn your ideas into reality in a short period of time. As a result, the time it takes to conceptualize and implement your next application will be cut in half.

It's critical to have a secure Android app if you want to keep your customers' sensitive personal information confidential. Thankfully, Android includes a number of built-in security protections that can assist security against malware and viruses.

5. Potential for cross-platform use

If you are considering to release your app on both the Google Play and Apple iOS stores, then your development team can pick the correct programming language and methodology early in the development process to achieve this objective for you. This way, you may launch your software on two market places at the same time – even simultaneously – and attract a larger audience.

There are several Mobile App development tools available to help you make your preferred mobile operation. Then is a list of the stylish mobile app tools that are popular across the globe.

React Native is an open- source mobile app development tool created by Facebook,Inc. for both Android and iOS. React Native combines native development's topmost features with React, a JavaScript toolkit for creating stoner interfaces. You may use React Native in your being systems or produce a new mobile app from launch.

Xamarin is a fairly youthful yet constantly used Microsoft open- source frame. It's a tool for creating cross-platform mobile apps. Xamarin creates apps for both Android and iOS using a single language, C#. It's a fantastic platform for creating native- looking mobile apps. Since Xamarin creates apps using C# inthe.NET frame, inventors may partake up to 90 of their law across platforms. This makes development more simplified and, in numerous cases, briskly. With Xamarin, inventors can produce mobile apps in Visual Studio or Visual Studio Code.

As across-platform mobile app development tool, Appcelerator provides everything you need to produce outstanding native mobile apps. Appcelerator is grounded on a single JavaScript law base, so you can write JavaScript and have it run natively on any device or zilches. 60 to 90 of law may be reused with the IDE and Titanium SDK. For a rich stoner experience, they give entirely native apps. There's also quick support for each new OS interpretation, which is a huge plus.

Sencha is a mobile app development tool that exceeds prospects, with 60 percent of Fortune 100 associations using it. inventors may use Sencha's results to produce apps for computers, tablets, and smartphones. Ext JS is a JavaScript frame that allows you to produce cross-platform web and mobile apps for any contemporary device. Ext JS comes with over 140 high- performance UI factors that have been pre-integrated and tested. You can produce end- to- end mobile apps using Sencha's state- of- the- art mobile app development tools.

Ionic is an open- source platform that can be used to produce both progressive web apps and mobile apps for free. It comes with a large set of UI factors that are mobile-friendly. This makes it simple to give a better stoner interface than native apps. You may use the JavaScript programming language to make operation development easier. Ionic is an excellent result for creating web, iOS, and Android apps that use web technologies similar as SASS, HTML5, and CSS. With Ionic, you also get top- notch touch- optimized gestures and AOT compendium.

Flutter is a mobile development tool that allows you to produce a single stoner interface for iOS, Android, and Windows. inventors can work this open source software library's suggestive and protean stoner interface toolkit. rather of participating a codebase, you may produce apps that perform as well as native apps exercising Dart languages. You also get rich stir UPIs to work with, which let your apps to get data from other apps on any device. Customers will get the finest user experience as a result of this.

Build your next Android Mobile Application with OdiTek!

OdiTek has years of experience in developing and deploying customized mobile application across different business verticals. We have been continuously deploying seamless, easy-to-use and intuitive applications as per the user expectations.

Are you ready to convert your ideas into a commercially sustainable product? Reach out to us today to learn more about our Android mobile application development services.