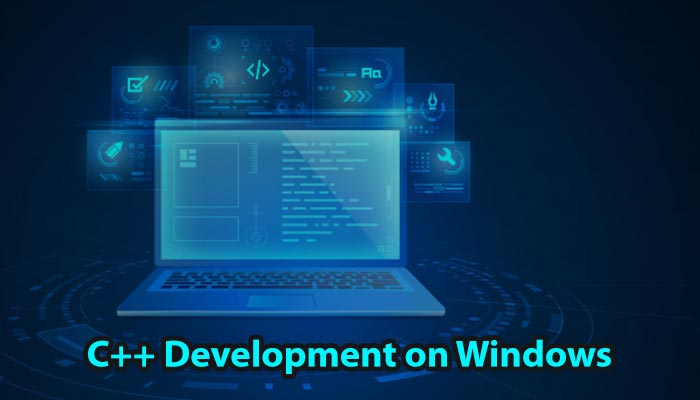 C++ is the most powerful and popular programming language so far. It is loved by developers because it has less complexity than other languages and also it can be applied to variety of system development scope. C++ has imperative, object-oriented, and generic commands to help developers in general-purpose programming/coding. C++ being an old programming language is still one of the most used languages in the programming world. Because of its huge popularity, a wide range of frameworks has come out on the market to make the developers work on big projects effortlessly.

Hence, the frameworks in C++ are increasingly becoming popular. C++ language is mainly used for desktop application development as well as embedded system implementation. However, developing games in C++ language is on the list, though web application in C++ is quite rare.

C++ development on Windows has nothing to do with the language; rather it focuses on setting up a development environment/tool chain for Windows. It can be developed for Windows by two common ways i.e.

The developers who work with the Microsoft platform already have a copy of Visual Studio pre-installed. They find themselves in a good situation regarding their projects where they can open any solution, make changes, and compile the file with the idea that all the required files and settings are already configured correctly. But the actual difficulty arises when it's the time to compile the projects and solutions in an environment which doesn’t have Visual Studio pre-installed. Since they only have to do all the changes manually. However, development with visual studios requires a specific set of IDEs. The best IDEs that will support C++ development on Windows are-

i. Visual Studio Code
It is an open-source code editor developed by Microsoft. It will provide smart code completion based on the variable types, essential modules as well as function definitions.

ii. Eclipse
Eclipse is a C++ website development tool. It highlights the syntax you have written and also validates it automatically. It enables you to easily debug the program. It additionally provides readymade code templates.

iii. Codelite
It is an open-source tool for writing programs in C++. It supports the refactoring of code. It highlights the syntax automatically by giving you the option to customize the syntax color. It can be used on Windows and Mac operating systems.

iv. Brackets.io
It is an open-source editor for developing web applications using C++. It can highlight the pair of brackets and also allows you to quickly edit the code written. It also facilitates you to customize the UI.

iv. Atom
It is a simple editor used for writing C++ programs. It can also be customized to do anything without modifying a config file. It can be used for cross-platform editing as well.

v. CLion
It helps to quickly solve the errors in the program. This IDE facilitates you to analyze the performance of your application without any hassle. It also enables you to test individual units of source code.

Setting up C++ Environment on Windows

Certain steps are there followed by which you will be able to create a simple C++ Environment on Windows.

1. Choose a perfect editor
Text editor is the first thing that you need to select for your programming. There is no such editor that you can call as the best. There are tons of great editors out there, however, these are some of the recommended ones that are easy and lightweight to use-

2. Install a Compiler
You don't have to worry about any compiler if you are already using Visual Studio since it comes with Microsoft Visual C++ compiler. But if not, then you will need additional compiler installed in your systems such as GNU Compiler Collection or MinGW-w64. However, MinGW-w64 is exclusively used by Notepad++ and Sublime Text.

3. Set up your editor
Sublime Text and Notepad++ are very easy to be configured with the MinGW-w64 compiler. An in-built system already exists in Sublime Text. But that builder doesn't fit properly with MinGW. Hence, a new build file that will use the MinGW-w64 compiler has to be created. In the case of Notepad, there is no such in-built system so, a standard NppExec plugin can be used to run arbitrary commands.

4. Write Code
It is the final step of the setup process. It is completely up to the developer. However, Sublime Text and Notepad++ are quite more lightweight as compared to Visual Studio, so, those who are willing for something simpler or lighter on the system resources, and then they can choose any of it.

Certain cross-platform GUIs are there for C++ that is used in C++ development purposes. C++ doesn't come up with a built-in graphical front-end like Python and many other programming languages. However, graphics on each operating system are created in a very different way to facilitate you to optimize all required functions. Such tool kits are-

It is the most popular and massively used open-source tool that is used in C++ GUI development. Its biggest strength is the windowing system, through which you can create user interfaces. It also includes advanced features such as displaying charts, data visualizations, and maps from third-party providers making it easier for the users to operate and use.

It’s quite similar to Qt in many ways. Some developers prefer it because wxWidgets use native SDKs that mean Windows built-in routines on Windows only and Mac routines on Mac to draw graphics. It makes the applications look more native on Windows as well as on Mac because of the graphics.

It is an open-source cross-platform library that also has a similar license to that of Qt. It focuses on audio, interactive, embedded, or graphic applications for C++ development on Windows. It also includes many user-interface elements, graphics, audio, networking, cryptography, multi-threading, integrated interpreter, etc. for better flexibility and performance.

It can be abbreviated as “Chromium Embedded Framework” which is a simple framework for embedding Chromium-based browsers in other applications. This is why it is different from the other C++ libraries which are used for creating standalone applications.

It works on Windows, Mac, and Linux supported by 32- as well as 64-bit. The primary focus of this GUI tool is on game development. Apart from this, it provides the developers a bunch of Widgets i.e. buttons, Combo, etc. so that you won’t be restricted to just game applications. Most games mainly require a GUI for the menus and configuration screens such as DirectX or OpenGL.

Full-cycle C, C++ software development services from Oditek are tailored to specific requirements. Whether you are looking to develop, upgrade, modernize or support and maintain C, C++ based applications and product solutions, OdiTek’s development team has over 15 years of experience to efficiently assist you no matter what environments or development platforms you are using.

C++ programming language is mostly used for desktop application development and embedded system implementation. But Apart from this, C++ application plays a vital role in gaming application development including GUI. Most people think that C++development Windows is a complex task because of the complications in choosing the editors, compilers, IDEs, GUIs, etc. However, it depends upon the analytical skills of the developer that how and what tool he will choose out of the large options to perfectly fit into the pre-determined goal.

Oditek Solutions deals with implementing a wide range of IDEs as well as GUI toolkits for C++ development on Windows. We, at Oditek, have expert developers who can help you resolve all your confusion regarding identifying the suitable IDEs and GUI toolkits as well as implementing those over your preferred application development. So that it will be helpful for your company in improving productivity with reduced cost as well as wastage.