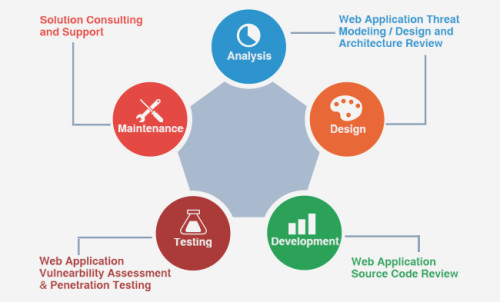 Web testing is the name given to software testing that focuses on web applications. Complete testing of a web-based system before going live can help address issues before the system is revealed to the public. Issues such as the security of the web application, the basic functionality of the site, its accessibility to handicapped users and fully able users, its ability to adapt to the multitude of desktops, devices, and operating systems, as well as readiness for expected traffic and number of users and the ability to survive a massive spike in user traffic, both of which are related to load testing. OdiTek has rich experience in Web Application Testing and Website Testing services.

Oditek Solutions has tested and delivered various websites and web based applications. We provide daily test report for our client which will help them to stay updated about the project progress. We have 5+years of Experience in the web app develope and testing technologies. Team of highly experienced test engineers with average experience over 5+ years etc.

WebLOAD: Webload is an enterprise-scale load testing tool which features powerful scripting capabilities, so you can test complex scenarios. WebLOAD supports hundreds of technologies – from Selenium to mobile, web protocols to enterprise applications and much more.

NeoLoad : It is a Neotys load and stress testing tool for Windows, Linux, and Solaris, available in English and French with the latest version 4.2, designed to measure, analyze and improve the performance of the website.

LoadRunner: It is a load testing tool for Windows and Linux, given by HP to test the web and other applications very efficiently before it goes to end user hands. It is available in stable version 12.0 in many languages.

Loadster: A commercial load testing tool to test websites, web applications/services (HTTP web services) and to simulate and guess how web applications will perform under heavy load, given by Loadster, supports Linux, Mac, and Windows

Telerik Test Studio: A software testing tool is to test web and desktop applications of all Windows OS, developed by Telerik. It tests the functionality, performance, and load of web, desktop, and mobile applications.

Selenium- Selenium is one of the most popular automated testing suite. Selenium is designed in a way to support and encourage automation testing of functional aspects of web based applications and a wide range of browsers and platforms.

Ranorex Studio- A Windows based GUI testing tool to test the desktop, web and mobile based applications and to handle any kind of modern and dynamic GUI application, given by Ranorex GmbH.

QTP- QTP (Quick Test Professional) a Windows based software testing tool used to test the applications on the web or desktop, best for“Functional” and “Regression” testing, given by Hewlett Packard (HP).

EggPlant Functional- eggPlant Functional helps you test your applications better, faster, and with less effort by automating the execution of your functional testing.
iMacros- iMacros is an extension for the Mozilla Firefox, Google Chrome and Internet Explorer web browsers which adds record and replay functionality similar to that found in web testing and form filler software.

Watin (Web Application Testing in .Net)- A cross-platform web application testing tool, latest version is 2.1, and developed in C# language. Due to the influence of Watir, Watin tested a web application written in .Net in December 2005.

Introduction React Native is like React. Instead of web components, it uses native components. Some...

The process of developing customized software applications for mobile devices is known as mobile application...

Considerations before you Hire Swift Developer

Swift is a general-purpose programming language that was created with a cutting-edge approach to software...

Importance Of Hiring A Sitefinity Development...

The degree of influence that the advancement of technology has contributed to the betterment of...