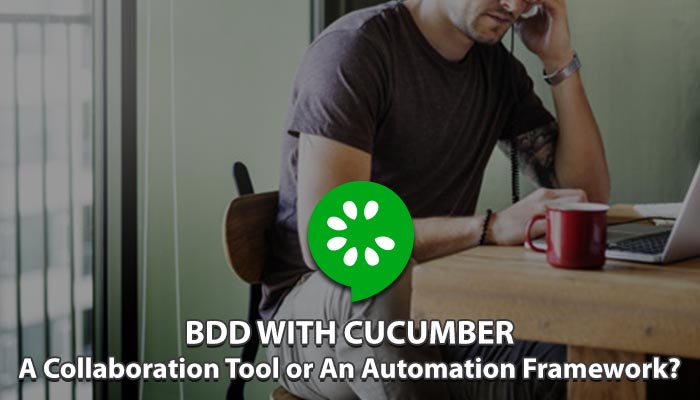 BDD with Cucumber: An Automation Framework Or A Collaboration Tool?

Behavior Driven Development (BDD) has created a lot of hype in the testing community over the past few years. Certain automation tools started gaining popularity and people even adopted and implemented it in their solutions. Your search for any test automation framework today, chances are it supports BDD. Although BDD with Cucumber has gained in popularity, most of the time people are truly not aware of what it is.

In this post, you will find a better understanding of what a Cucumber BDD framework is, how Cucumber supports BDD processes, and if Cucumber is the right testing tool for you to use.

What is BDD About?

BDD is a process designed to aid the management and the delivery of software development projects by improving communication between business professionals and engineers. In doing so, the Cucumber BDD framework ensures all development projects remain focused on delivering what the business needs while meeting every requirement of the user.

It closes the gap between business and engineers by -

1.Encouraging collaboration to build a shared understanding of the problem to be solved.
2.Working in small iterations to increase feedback and the flow of value.
3.Producing system documentation that gets checked automatically against the system’s behavior.

The idea behind BDD is to combine automated tests, functional requirements, and software documentation into a single format that could easily be understood by engineering teams and non-technical people.

Now that you know what BDD is all about, let us discuss the role test automation plays in it.

Gherkin is a domain-specific language. It was originally developed and maintained by Cucumber, one of the most popular BDD frameworks. This semi-formal language makes specifications easy to automate and understand by anyone in the team.

The scenarios obtained from ‘Specification by Example’ are grouped into a corresponding feature file in which we define the expected behavior of our application. Scenarios sound like plain English and are meant to be short. Each scenario has the following structure:

1.Given some initial state
2.When an action is taken
3.They verify an outcome

You need to choose and use the right set of tools for successfully applying test automation in software projects. This depends entirely on the scope of your project, libraries integration, technology limitations, and the type of testing needed to perform. You need to make sure the tools includes the following features for a good start:

If you are planning to work with a true BDD approach then you should consider using a tool like Cucumber.

If you apply BDD to test automation when there is an improper BDD process, chances are that you will end up dealing with the complexity of a BDD tool and undermining what you are striving to accomplish in the first place.

Cumbersome Syntax: Ignoring rules like writing steps as a subject-predicate action phrase and in a third-person point of view, to meet the requirements of Gherkin syntax can lead to over-complication.

An Extra Layer of Complexity: Writing reusable steps is hard and finding a particular step you have already implemented once is even harder. Not only this adds an extra layer of complexity to the test automation solution, but it is definitely not a good practice, no matter what.

Advantages of Using Cucumber with BDD


Cucumber plays a primary role in supporting a behavior-driven development approach. Let’s discuss some of the key advantages of Cucumber for BDD. With Cucumber you can:

1. Write BDD tests in the ubiquitous language, a language structured around the domain model. This language can be understood by all team members including BAs, testers, and developers.
2. Build communication with the technical and non-technical members of your team.
3. Interact directly with the developers’ code, which is written in a language that business stakeholders can understand.
4. Run tests written in a behavior-driven development style.

Things to Keep in Mind When Testing with Cucumber BDD Framework

1. Automation tests are very important and the code should follow coding practice, convention, etc.
2. A good editor should support debugging and editing feature files in normal text format. RubyMine and Aptana are highly recommendable.
3. Make feature files a real ‘communication’ layer, which is a place for receiving test data, formatting test data. No domain business logic is included.
By supporting the communication layer on top of a strong testing framework, Cucumber not only performs automation tests on a wide range of testing fields but also helps to improve the communication among members in the team. And this feature is hardly found in other testing frameworks.


If Cucumber BDD Framework is the right tool for the job, then make sure you follow their best practices and guidelines. Focus on what a user wants to do and not on the implementation details. Write non-conjunctive, reusable steps with a robust structure and clear meaning. Also, make sure to take a good look at Cucumber’s Gherkin reference documentation.

I hope this post helped you better understand BDD with Cucumber. For further information, please give us a call today!