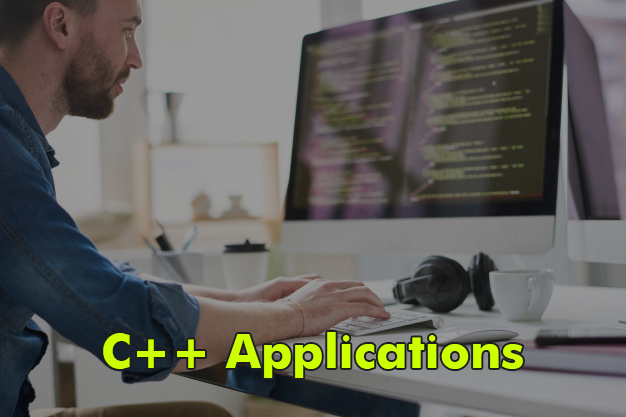 C++ language is an Object-Oriented Programming Language that comes with certain generic features that enable its users to create different kinds of web applications as well as software infrastructures such as E-commerce platforms, desktop applications, and, websites. C++provides certain tools that allow developers to handle demanding development projects. The continuous update in this technology makes it even more efficient for application development needs.

Certain applications that are developed with C++ languages, as well as C++ technologies, are as follows

A popular media application from Microsoft that has been catering to all sorts of audio-visual needs for a long, is developed in C++.

Most of the application provided by Google such as Google file system, Google Chromium browser, WebRTC, gRPC, and DeepMind Lab, etc. are written in C++

The popular audio streaming application Spotify has a back-end written in C++. The robust technology and powerful features of C++ make it possible for Spotify to manages the enormous amount of data.

Though YouTube is written in a few different languages still, C++ was used for the core function of this application i.e. video processing.

However, apart from applications, C++ has also been used for developing Operating Systems. The strongly typed and fast programming feature makes it an ideal choice for operating systems and browsers. C++ also has a wide collection of system-level functions for writing low-level programs.

Moreover, because of the quick performance of C++, most programs have their delivering program written in C++.

The open-source internet browser of Mozilla i.e. Firefox is developed completely in C++.

Chrome browser by Google is the fastest and safest browser which is also written in C++.

C++ development environment is nothing but software platforms that facilitates developers with a comprehensive set of tools for software development in a single product over C++ programming languages. They work with specific platforms in order to remove barriers involved in the software development process.
Few phases are involved in creating and executing a C++ application using a C++ dev environment, such as- edit, pre-process, compile, link, load and execute. Apart from this C++ systems consist of three parts i.e. C++ Standard Library, the language, and Program Development Environment.

C++ applications are robust, scalable and there is no doubt when it comes to the performance of the application written in C++. I am sure now you have got a brief idea about what C++ can deliver. If you have any questions about your next project or want to consider C++ for the same, please feel free to contact us at - info@oditeksolutions.com