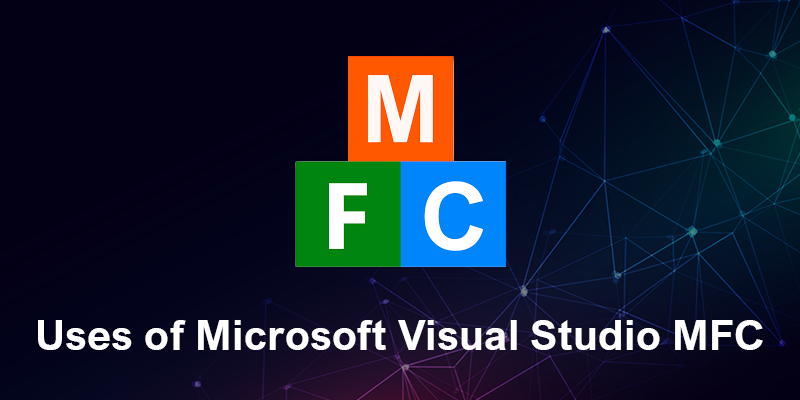 The Microsoft MFC is a C++ object-oriented library wrapper for many of the Win32 and COM APIs. Although it may be used to create relatively simple desktop apps, it is most effective when developing more complicated user interfaces with several controls. Used to create Windows desktop applications. Microsoft released MFC in 1992, and it immediately became popular. Despite the fact that Microsoft has launched alternative application frameworks since then, Microsoft MFC is still frequently utilized.

Visual Studio includes a code editor that supports IntelliSense (code completion) and code refactoring. The integrated debugger can debug at both the source and machine levels. A code profiler, a designer for constructing GUI applications, a web designer, a class designer, and a database schema designer are among the other built-in tools. It accepts plug-ins that extend functionality at almost every level, including adding support for source control systems (such as Subversion and Git) and new toolsets such as editors and visual designers for domain-specific languages, as well as toolsets for other aspects of the software development lifecycle.

Visual Studio supports 36 programming languages and allows the code editor and debugger to support practically any programming language as long as a language-specific service is available. C, C++, C++/CLI, Visual Basic.NET, C #, F #, JavaScript, TypeScript, XML, XSLT, HTML, and CSS are among the built-in languages. Plug-ins provide support for additional languages such as Python, Ruby, Node.js, and M, among others. Previously, Java (and J#) were supported.

MVS is a Microsoft integrated development environment (IDE). It is employed in the development of computer programmes, websites, web apps, web services, and mobile applications. It makes use of platforms such as the Windows API, Windows Forms, Windows Store, and Microsoft Silverlight. And OdiTek provides the best software development services with a skilled workforce.

Please reach out to us for more information on GUI development using MFC at info@oditeksolutions.com.